Where Can You Play It?

If you want to take a spin on Totem Lightning Power Reels Slot then you are in luck because this exciting slot is available to play at some of our favourite casinos including Top Dog Slots, Tea Time Bingo and WTG Bingo!

Each of these sites has an impressive welcome bonus for new players which will have you spinning on the Mega Wheel to win Amazon Vouchers or free spins if you’re lucky! Make sure to check them out as soon as possible.

This slot is a power reels game which means that there are 8 reels and 6 rows full of symbols that you can win on. The theme sets this slot in Native American and so you’ll see some masks and characters that fit in well with the totem theme and these act as the higher-value symbols. For the lower value symbols, you’ll notice the classic playing card royals which have been dressed up a little to fit in. 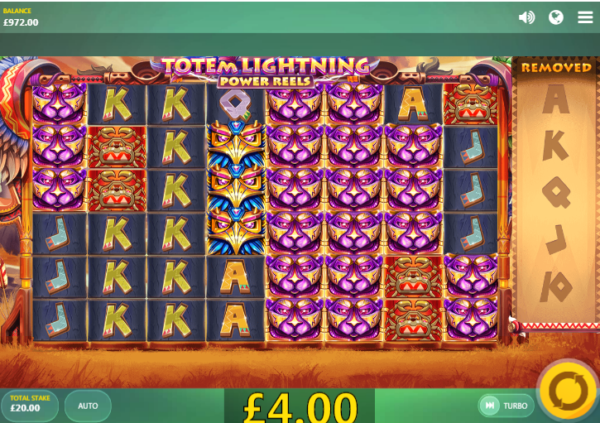 All of the colours used are bright and make this game very attractive to look at. Red Tiger Gaming have included 30 paylines for you to win across in Totem Lightning Power Reels. This slot is simple in design but complicated in the way in which it is played.

Totem Lightning Power Reels Slot works on a drop reel engine which means that you’ll get more symbols added to your reels each time you make a win. Your new win will be recalculated based on the symbols that appear and you might just be able to hit the jackpot prize through this! The drop feature makes this slot very exciting and gives you the chance to keep winning for longer!

Don’t worry if you land a winning combination of low-value symbols because the lightning will strike and that symbol will be removed! Symbols that have been struck out will be seen over on the right-hand side of the reels. This feature is quite exciting so make sure to keep an eye on the Reel Strike bar as you’ll get some respins and big prizes! Don’t forget that if the lightning bolt happens to hit a symbol that is already on the bar then you’ll see it removed before you even spin!

To win big on Totem Lightning Power Reels Slot, you’ll need to bet big. Bets on this slot range between 20p and £20 per spin so think wisely before placing your bet! Make sure to look out for the removed symbols as these can have a huge impact on how the game is played!

Totem Lightning Power Reels Slot is a fantastic new slot from Red Tiger Gaming. We love the theme as it is a little different to what we usually see from this developer. With the power reels in play, this slot has the potential to win players a lot of cash. If you want to go on an adventure into Native America – make sure to take a spin on Totem Lightning Power Reels Slot before it is too late!

Spin the Wheel for up to 500 Free Spins Welcome Bonus!