Eyecon has added a third installment to the series so we’ve been giving it a test run to compare it to the first two games in the series so keep reading for more info on the new Fluffy Fairground slot game. We will review the new game and then we will look at how it stacks up compared to both Fluffy Favourites and Fluffy Too.

This is set to be one of the most popular games of the year so we thought we would look at some sites where you will be able to play Fluffy Fairground. Here are some of our choice picks:

T&Cs apply for all offers.

If you have played either the first or the second game then you will have no issues diving straight in and getting started on the third game in the series. Eyecon sticks to its classic formula which makes this an extremely enjoyable game once you have the hang of it. In terms of general rules, wins on different paylines are added and new players should note that malfunction of this game will void all pays and plays.

The return to player is currently sitting at 95.3% which is pretty standard for Eyecon slots and this game also includes a couple of bonus features which we will discuss later on in our review. Playing the game is simple – you need to spin the reels to uncover winning combinations by completing line wins that are outlined in the paytable. There are 25 paylines in total and these are spread across 5 reels.

Different players have different strategies for playing slots and this is also true for Fluffy Fairground. Of course, you can never overcome the RTP so strategising is all about what you can control on this slot. We would recommend altering your paylines to a comfortable level as these are adjustable. This will affect your minimum and maximum bet so having a play around with them is a good way to find out which works best for you.

Another consideration at this stage would be the device that you choose to play from. Fluffy Fairground, like its predecessors, is fully optimised for mobile use and this means that you will be able access Fluffy Fairground on a number of devices. Choose a device that you are comfortable with and this could be a PC, laptop, smartphone or even tablet. Then you will be ready to spin this game and hopefully win some cash!

There is the argument that Eyecon slots have some of the most lucrative bonus rounds in the industry so we were pleased to see that Fluffy Fairground has some rather interesting ones as well. First of all, there is the wild symbol and this is the classic Pink Elephant icon that players of the first two games will instantly recognise. It replaces almost all others on the reel (except the scatter) and helps players pick up additional winning combinations when it contributes to a line win. 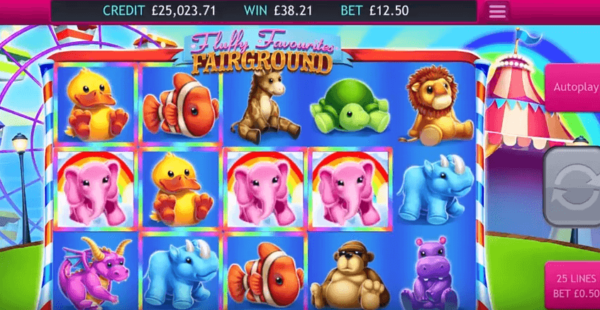 Also, the wild will double all prizes when it appears in a line win as well so it is a really useful symbol that can a really help top up your balance. The second bonus symbol is the scatter icon and this is symbolised by the Big-Top Tent and scattered wins on this game pay any. For each scatter, the highest scatter win only is added to the line wins and they are also multiplied by the total wager.

Both of these symbols also serve and additional purpose with two more bonus rounds also available. The Pink Elephant wild will also trigger the free spins bonus round. Normally, the scatter symbol begins this round but not in Fluffy Fairground and you need to land 3, 4 or 5 of these symbol to trigger the feature and you will be rewarded with 15, 20 or 25 free spins respectively.

During the free spins round, all prizes are tripled and they are played using the same paylines and wager as the triggering game. The feature can also be re-triggered up to a maximum of 15 times. Overall, it is a useful bonus round that activates fairly often and can offer you plenty of free spins so be sure to keep your eyes peeled for those Pink Elephant symbols – not that you can miss them!

Also, we have the Gamble Feature which you can activate after any win and this feature is available on all Fluffy Fairground slots. This feature allows you to risk your latest win for the chance to double your money. You can click the gamble button to begin the feature and there will be two choices presented to you. If you can guess correctly from the options presented to you then you will double your money.

Finally, we have saved the best for last and the last bonus feature in this game is the Prize Pick. If you’ve played Eyecon games before then you may have encountered this popular feature and we are pleased to say that it has made it into Fluffy Fairground. This feature begins when you land at least 3 of the Big-Top Tent symbols that we mentioned and this will result in a good old line wager. 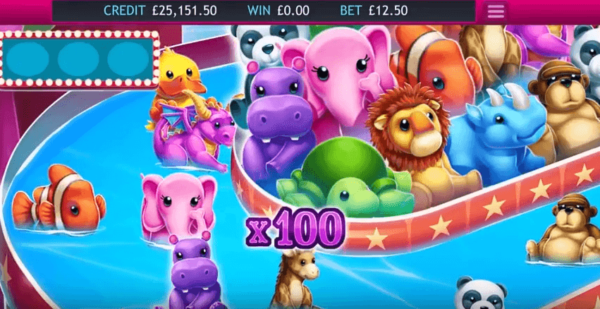 The maximum prize available for this bonus round is a 100X line wager so it could potentially lead to a massive payout although this is rare. The prizes that are awarded are added together and the player is awarded one pick for each scattered Big-Top Tent winning combination. That’s it for bonus rounds on this game and as you can see, there are plenty of great bonuses to unlock.

How Does it Compare to other Games in the Series?

To get a better idea of how the Fluffy Favourites Fairground slot stacks up compared to the first two games, we played all three games for a set period of time and compared each game’s features, bonuses and design. To help our readers compare each game in a simple way we are going to discuss the pros and cons of Fluffy Favourites, Fluffy Too and finally, Fluffy Fairground.

Starting with the first game in the series, Fluffy Favourites is arguably the most popular slot game of all and you will find that a lot of online casinos will include free spins in their welcome offers for this game. To us, Fluffy Favourites has the distinct advantage over the other two games for players who are looking to claim free spins on other bingo or casino sites. Despite the game’s age, it still proves massively popular with players and it still has some great bonuses as well.

The second instalment took us on a trip to the seaside and it was a nice change of scenery from the theme of the first game. All of the cute creatures that made their debut in the first game reprised their role for the second title in the series. In terms of gameplay, the game is extremely similar to the first with the same reels and paylines as the first. The differences were fairly minimal but players seemed to enjoy the updated graphics.

Compared to the first two games we would argue that the Fluffy Fairground slot game is the strongest in the series. This was the game that finally saw the switch to some truly 3D graphics and it is most definitely the best-looking game in the series. We loved the sound effects and overall, it just feels like a highly polished version of the first two games but still the same great core features that we have come to expect from Eyecon.

If we’re being completely honest we would like to have seen a new feature added to the third game in addition to the Prize Pick feature. Eyecon seems to stick with what it knows and although, the game is a major improvement in terms of design, there is nothing truly unique in terms of gameplay which some players may find a little disappointing.

The Best in the Series so Far?

Only time will tell if this game lives up to the hype but we are certainly looking forward to seeing how it is received by players. In our opinion, the first two games were too similar to each other but Fluffy Fairground seems to have finally taken a step forward and this is highlighted by the much-improved graphics with this slot having finally taken the step in becoming fully 3D.

We think it has potential to be the best in the series and although the gameplay is pretty much the same as the previous games, the much-improved design makes it truly feel like a true sequel to both Fluffy Favourites and Fluffy Too. If you’ve played the first two games then you will be ready to try this out but if you haven’t then perhaps it would be a good idea to try out Fluffy Favourites first.

We use cookies on our website to give you the most relevant experience by remembering your preferences and repeat visits. By clicking “Accept All”, you consent to the use of ALL the cookies. However, you may visit "Cookie Settings" to provide a controlled consent.
Cookie SettingsAccept All
Manage consent

This website uses cookies to improve your experience while you navigate through the website. Out of these, the cookies that are categorized as necessary are stored on your browser as they are essential for the working of basic functionalities of the website. We also use third-party cookies that help us analyze and understand how you use this website. These cookies will be stored in your browser only with your consent. You also have the option to opt-out of these cookies. But opting out of some of these cookies may affect your browsing experience.
Necessary Always Enabled
Necessary cookies are absolutely essential for the website to function properly. These cookies ensure basic functionalities and security features of the website, anonymously.
Functional
Functional cookies help to perform certain functionalities like sharing the content of the website on social media platforms, collect feedbacks, and other third-party features.
Performance
Performance cookies are used to understand and analyze the key performance indexes of the website which helps in delivering a better user experience for the visitors.
Analytics
Analytical cookies are used to understand how visitors interact with the website. These cookies help provide information on metrics the number of visitors, bounce rate, traffic source, etc.
Advertisement
Advertisement cookies are used to provide visitors with relevant ads and marketing campaigns. These cookies track visitors across websites and collect information to provide customized ads.
Others
Other uncategorized cookies are those that are being analyzed and have not been classified into a category as yet.
SAVE & ACCEPT
X